What superheroes are to Hollywood, hinterland gun dramas have become to Bollywood. We have had multiple helpings of revenge sagas unfolding in the backdrop of guns blazing and blood spilling since the late ’90s (think Shool). It was around that time when the badlands of Uttar Pradesh and Bihar began playing the perfect antithesis to the Swiss Alps for those (with not-so-deep-pockets) seeking to usher in a new kind of storytelling in Hindi cinema. And the formulae continues to be a go-to as we speak, with Amazon Prime Video India’s latest Original, Mirzapur. Understandably, the novelty of the genre has worn off in 2018, and this is where an edgy narrative would have helped save the day.

Though armed with a stellar star cast, a loose plot and largely unimpressive writing causes Mirzapur to systematically stumble till it falls on its face. Akhandanand Tripathi urf Kaleen Bhaiya, is the “king” of Mirzapur and played by the brilliant Pankaj Tripathi, who is turning out to be hinterland’s poster boy. ‘Kaleen’ here refers to carpets. In the guise of a carpet export business, Tripathi runs an illegal firearms and opium trade that makes him a near invincible power, on paper. But there is many a chink in his armour, starting from his monster of a son, Munna, played by Divyendu Sharma. The loose cannon, gun-toting, coke-sniffing Munna is unfortunately the character Mirzapur rests on, from start to finish. Thanks to some mindless firing at a random shaadi (wedding) where Munna ends up shooting the groom, their paths cross with Guddu and Bablu Pandit, sons of the city’s only upright lawyer, Ramakant Pandit. A beefed up Ali Fazal’s Guddu teams up with Vikrant Massey’s more collected and calculated Bablu to form a brawns-and-brains combo that knows no fear. Together they pull us into a maze of plots and sub-plots where the violence is as deafening as it is blinding. And after a point, you cannot see beyond the gore.

Munna is meant to be menacing and has been given all the goods — cuss words aplenty, enough coke to sniff, an animalistic libido and a demonic thirst for power and blood. Sharma delivers an earnest performance but his cherubic face and thin voice belies the sickening alpha male persona of his character. And no, the stubble does not help. Yes, I am crying for stereotypes here, because of course Mirzapur is no parody or a documentary. In nearly every scene, Munna does something horrific but instead of being terrifying, he only ends up being progressively annoying. The future of Mirzapur, the show, therefore, looks bleak as his is the only character that is likely to take the story forward, in the second season.

The series gets its cliffhangers right. You want to see what is next in the hope of seeing something better than what is happening already. The characters are introduced in the right pace, but only a few get a good graph. Shweta Tripathi’s character Golu, for instance, is one of the few redeeming ones in Mirzapur. She is introduced in the throes of self-pleasure in a dark corner of a library, and before you can slot her in your mind, Golu turns around completely. She becomes a fearless motor mouth who takes on Munna. It is a pity that she gets so little screen time. Shweta Tripathi hits all the notes of Golu’s complexities – from a budding crush to being a protective sister and a no-nonsense college topper – this quiet talent gets it right.

Tripathi’s subtle chemistry with Massey provides a relief from the constant gore, and lends the story a fleeting balance. Massey, for his part, plays Bablu to perfection, whose strategic mind undercuts his wide-eyed innocence. Fazal’s hulk-like presence is a departure from his chocolaty image and he impresses as well. But even with all the ammo, like Munna, he too fails to terrify. 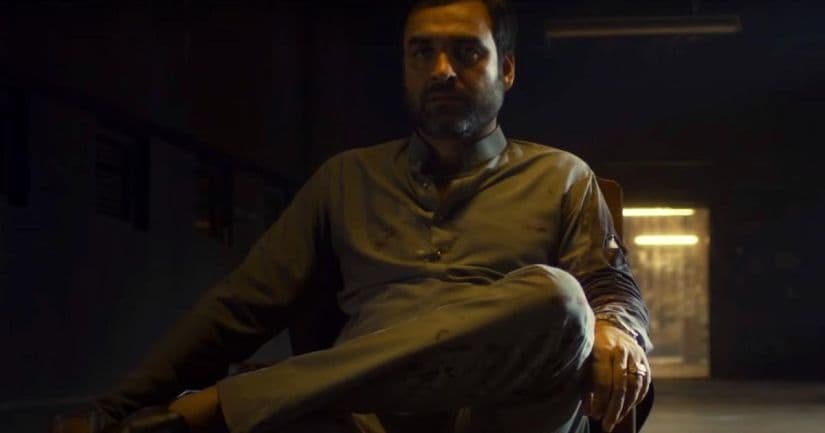 The women of Mirzapur are a species unto their own. No amount of guns or gore terrify them. In fact, they can occasionally pull a trigger or two, without batting an eyelid. An otherwise wasted Rasika Duggal, who plays Tripathi’s bored, seductive and insatiable wife Beena, enacts one of the most brutal scenes of the series. Sharing screen space with her is Kulbhushan Kharbanda, who plays the creepy bauji (patriarch) of the Tripathi khaandaan (household). Throughout the series, Kharbanda is relegated to the background, strapped to his wheelchair watching wildlife porn on “Wild TV”. It’s only in the ultimate chapter of Mirzapur that we see the barbarous limits of Bauji.

Every episode makes you feel that the makers were engaged in a contest with themselves on how much more blood to spill. Granted, the milieu is no rose garden, but the way the series glorifies the gore is problematic, in my opinion. There is not one character that exudes intrigue; painting them creepy does not cut it. And the context is not delved into at all. It is like the series was written to get from one point of gore to another. And these (plot) points are precariously hanging in a balance. There are enough ways to paint a town blood red without actually showing guts being ripped out. Indulging in pointless bloodshed is nothing but laziness. To an audience that has overdosed on hinterland dramas for over a decade now, and has had some treats too like Omkara and Gangs of Wasseypur, there has to be something more. The fake blood industry is peaking sure, but let us give a boost to the writing too, folks.

Mirzapur is an irksome waste of the industry’s finest talents. The superficial thrills might work in parts only because it is a web showm, and not a film that one buys a ticket to. Aside from a few redeeming moments, Mirzapur remains profane, graphic and destructive, but never explosive. Despite all the bangs, it ends up in a whimper.