In every frame of director Kaushik Ganguly’s latest film Kishore Kumar Junior, Bengal’s leading matinee idol Prosenit Chatterjee struts around with a swag that is charmingly reminiscent of an artist who is at the peak of his popularity and is anything but down to earth. Basking in the adulation of the people who surround him, he is constantly reminded of his fame and enjoys every bit of the attention he gets.

But take a closer look, and you will find that not all is well in his backyard. Ganguly’s film could have been perfect had it merely started and ended with the first act itself. There was so much to explore there, so many things to say, such beautiful emotions to study – facets hitherto unexplored in Bengali cinema, at least to my knowledge. That would have made for a wonderful film in itself. But that was not to be. Ganguly introduces a crisis in the plot – one that is far, far more artificial than the organic one that already exists in his protagonist’s life. And it is in doing so that he completely loses his grip on the narrative, which up until then, had kept me glued to my seat, but which left me with a vacuum in my heart ever since. Prosenjit Chatterjee in a still from Kishore Kumar Junior

Inspired by the life and work of singer Goutam Ghosh – a man who has dedicated his whole life to singing ‘in the voice of Kishore Kumar,’ so to speak – Kishore Kumar Junior is the bittersweet tale of a middle-aged singer who is extremely popular among the masses of a music-crazy West Bengal, especially those from the suburbs. His voice is uncannily similar to that of the legendary singer himself, and KKJ – as he calls himself – has no qualms about having built his entire life as an imitation of someone else. He drowns himself in alcohol before and after his performances, and his loyal band members (or ‘hands’ – as they are usually called) often drop him home in an inebriated state, much to the chagrin of his family. His wife supports his music career, but his teenage son finds him an embarrassment – so much so that he literally hates the very mention of the great singer his father is a cheap, two-bit imitation of. Things take an ugly turn when KKJ is summoned to the borders of India and Pakistan to perform for a show. Once they land in Jaisalmer, KKJ and his wife, along with seven others from their band, are kidnapped by robbers. The rest of the story – quite unfortunately – follows KKJ as he and his wife try to break free from the kidnappers.

With an idea that is perhaps one of the cleverest ones I have seen at the movies this year, and with such fine actors as Prosenjit Chatterjee and Aparajita Auddy on board, this film should have been one of the most well-made films of the year. There is only one reason why it is not – the script. The first act of the film is so beautifully written that it will give you goosebumps. I dare you to move from your seat as Chatterjee, drunk to his gills, is helped on to the stage by his loyal manager-cum-flautist, and performs one Kishore Kumar ditty after another in his soaring, potent voice. I dare you to keep your eyes dry as Chatterjee’s KKJ goes on a rampage of verbal and physical abuse against his family and friends, completely blinded by his own fame. And I dare you to not feel a warm glow in your heart as the morning after, the same man, sits in a tea stall in true regal style, surrounded by a bevy of neighbourhood fans, as they coax him to sing one – just one – song of Kishore Kumar. The tragedy of it all, the fact that his art is not really his own, is so heartbreaking, and yet the futility of putting a tag of ownership on something so beautiful as music is so delicately conveyed in these scenes, that I was completely drawn into the movie. And then came the rude jolt.

The second act of the film is not only unnecessary, it is far too long drawn as well. The entire angle of the kidnapping was not required at all. The shades of grey in the life of a copycat artist in itself has so much to offer. Even within the second act, there were several plot elements which were poorly handled. The Stockholm Syndrome bit, the shakily written characters of the two robbers (played by Masood Akhtar and Rajat Sharma) and an entire elaborate set piece created around the Bengali sentiment around good food – all of it was a colossal mess. 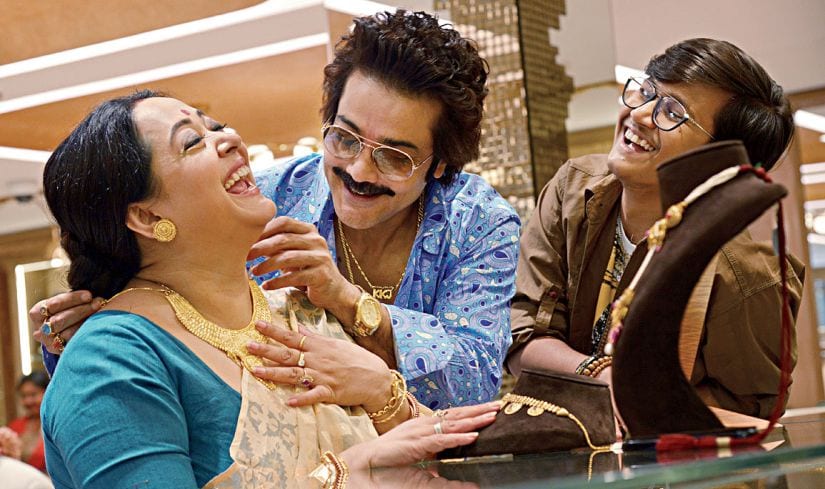 A still from Kishore Kumar Junior

But one thing has to be said. Both Prosenjit and Aparajita Auddy (as KKJ’s wife Rita) have tried to give their best to the film. While Chatterjee is consistently good throughout the entire length of the film, the poor writing does have its impact on such a fine actress as Auddy. There are scenes where she has literally nothing to do, and even she cannot save those. Chatterjee, however, was in complete command of his role. I have a feeling he was aware of the true potential of the film when the project must have begun, and you can see that he is putting his heart into it. Not a single misstep, not the slightest over or underacting, never missing the king charm or the unabashed swagger that the role demands, Chatterjee is – without a doubt – the best thing in the film, and also the only reason why I managed to sit through it.

With every other scene being used for product placements and brand promotions, I have only one thing to say to the producers. Take it as a feedback coming from not only a ticket buying member of the audience, but also a lover of cinema – if you cannot finance a movie without having to force the actors to step out of the flow of the film and sell literally dozens of products and services, if you force the writers to concoct entirely unnecessary scenes just to ensure that you can showcase a sponsor’s brand, and if you are not even the least bit bothered by what all of this is doing to that one thing that might have come across to you as the least important cog in this entire wheel – the story – then you have no business being in the profession of making movies. Get out – go sell a lemonade or something. These are the arts, and we live and breathe by it. You do not belong here.

I am just waiting for the film to come on platforms other than the theatre, so that I can watch the first few minutes in a loop. Because what those first 20 minutes contained, the rest of the 120 could not even capture a tiny fraction of. And what a tragic waste that is!